The Stellar network is a distributed, blockchain-based ledger that facilitates cross-asset transfers of value, including payments. The native digital asset of the blockchain is called Lumen (XLM). Like Ripple, Stellar can handle exchanges between fiat currencies and also between cryptocurrencies. However, Stellar is open source and the Stellar organization is non-profit.

Stellar launched in 2014 as a fork of Ripple and both currencies are still very similar. Both platforms allow users to send their money to and from anywhere in the world. Users can liquidate or exchange their funds for other crypto or fiat currencies using exchange anchors. The project focuses not only on banks like Ripple but also on individuals. Moreover, Stellar wants to connect people to the financial system, who live in poor countries and still can’t use digital money. Another difference to Ripple is that the protocol is open source just like Bitcoin or Ethereum. Stellar can process up to 1000 transactions per second with minimal transaction costs.

How does Stellar work?

The Stellar network runs on a web of decentralized servers supported by a consortium of entities and individuals. These servers save the distributed ledger that keeps track of all the transactions made on the Stellar network. To issue a transaction, you have to send your funds to an anchor on the network. Anchors serve as bridge for any given currency on the Stellar network. A financial institution like a bank can act as an anchor on the network. The anchor holds your money and issues credit to your virtual wallet. Your credit can be sent and received between people on the network in seconds. The network will automatically convert your money into another currency at the lowest rate. The conversion can happen through an offer that somebody made on the network, through Lumen as an intermediary currency or through a chain of conversions. 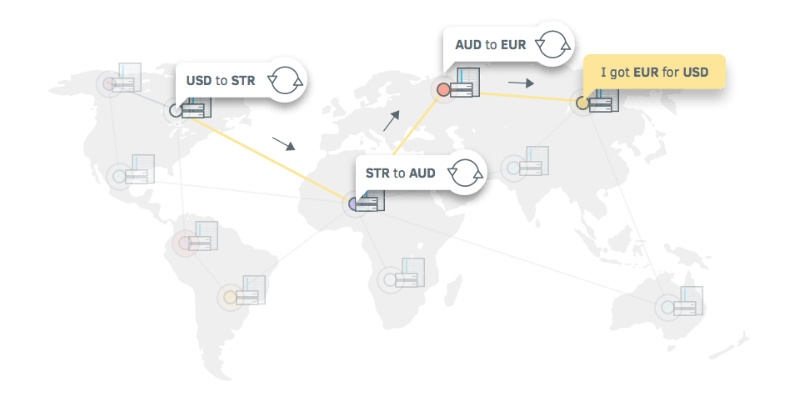 A chain of conversions // Source: Stellar.org

Stellar uses the Stellar Consensus Protocol (SCP) as a consensus mechanism. It is an evolution of the Federated Byzantine Agreement (FBA), which is a model for consensus using nodes, quorum slices and quorums. Quorum slices are nodes used for reaching an agreement. An agreement that can never change in the future is a quorum. The difference between the original model and the Stellar Consensus Protocol is that only a small number of nodes needs to confirm a transaction instead of the whole network. This makes transactions on the Stellar network very fast and cheap. Time will tell which nodes are more trustworthy than others. Those nodes will build quorum intersections. Those nodes will protect the network against less trustworthy nodes or hacker attacks.

How to buy Stellar