Cryptocurrencies and blockchains are very important topics since Bitcoin’s launch in 2009. The first real-world Bitcoin transaction was made in 2009 to buy two pizzas for 10,000 Bitcoins, which are now worth more than 62 million US Dollars. In December of 2017 Bitcoin’s price reached its top with a price of $19,783 per Bitcoin. However, not only the value of Bitcoin increased significantly. Ethereum and many other cryptocurrencies took the original concept of a blockchain and extended it with features like smart-contracts and decentralized apps. But why are cryptocurrencies so revolutionary? Also, what is a blockchain and how does it work?

Why are cryptocurrencies so revolutionary?

The functions of money

There are three functions or services that money has to provide. Money has to serve as a medium of exchange, as a store of value and as a unit of account.

The third and final function is unit of account. With money being accepted as a medium of exchange, it provides a measurement of goods and services being exchanged.

From barter to bitcoin

In history, there were several forms of money like gold, commodity money or fiat money, which is the form of money we use today. Even though gold is a good store of value, it is very hard to transport because of its weight and its even more difficult to split an ounce of gold into two pieces. Commodity money is paper money that is linked to an amount of gold. This makes it easier to transport and better to split than gold.

So why do we use fiat money today, when commodity money is already a great medium of exchange, store of value and unit of account? In 1973 the link between gold and money was removed. Banks weren’t allowed to exchange gold ounces for commodity money anymore. This new form of money is called fiat money. Central banks around the world can print fiat money which is not linked to gold or any other goods. So fiat money relies solely on the trust that we put in central banks. 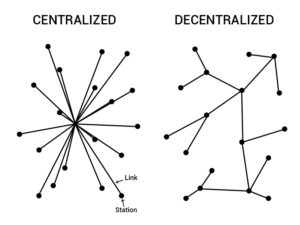 How does a blockchain work?

A blockchain is a chain of blocks that contains information. Every block on the chain contains a number of accepted transactions and a hash of the previous block. When enough transactions are added to the block, the block will be added to the blockchain and then distributed to the network of communicating nodes running the software. The nodes need to save the whole blockchain and check every block against consensus rules. Some nodes are mining nodes. They add blocks to the blockchain by solving a mathematical puzzle and including the answer in the block. For solving this puzzle, miners receive rewards in form of coins.

Proof of work is the oldest and most commonly used consensus mechanism. Miners create new blocks by solving a mathematical puzzle. The first miner to complete this task gets rewarded. There are advantages and disadvantages to this system. One advantage is that it is the most tested mechanism and therefore the least error-prone. However, mining becomes more and more power consuming. This makes it not only expensive but also harmful to the environment. The two most well-known cryptocurrencies Bitcoin and Ethereum utilize proof of work.

A soft fork is an update of the existing protocol. The old version of the protocol will still be accepted, however it doesn’t feature the functions of the new protocol. This means that a soft fork is backwards compatible.